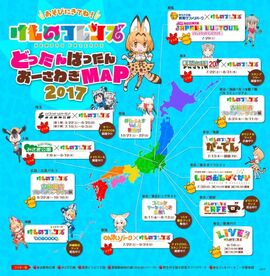 Since the Kemono Friends Project started, there had already some cross platform collaborations decided and mainly for promoting the application game.

After the huge success of the Kemono Friends Anime in Japan, there are more collaborations and events started to announce.

There were 2 crossover collaboration events on the mobile game:

Date:
March 26, 2015 11.30pm ~ April 2, 2015 2.59pm
April 2, 2015 4.15pm ~ April 9, 2015 12.59pm
Description:
It's the first collaboration for the game and featured the characters from the manga series Keroro Gunso written by Yoshizaki Mine, who also is the creator of Kemono Friends series. In this event, Keroro and his platoon: Tamama, Giroro, Kururu, Dororo turn into Friends by Sandstar, you can scout them to join your team and gain some new cosmetic dresses for your Friends.

Date:
April, 2017
Description:
This collaboration was started before the anime was aired. Originally it would feature Serval as the pattern on the bathtub, but later changed to Ezo Red Fox and Silver Fox because their episode was related with hot spring. The Kerorin Bathtub costs 1404 Yen and sold over 20000 units from April to July.

Date:
June 30, 2017
Description:
The JRA (Japan Racing Association) announced the collaboration with Kemono Friends on May 29, 2017, and set up a website that allowed visitors to click on the speech bubble that cause Serval to said "Sugoi!" and count the number of clicks. On June 30, the number of clicks grossed over 400,000,000 clicks and the website revealed 3 new Friends: Brown Thoroughbred, White Thoroughbred and Black Thoroughbred with Athlete Serval. There are information of the thoroughbreds, and also a mini game that check which Friends you're by Reticulated Giraffe.

On August 9, 2017, the website uploaded an original anime short video "Racecourse" made by Irodori on Youtube and Nicovideo. 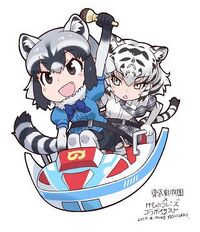 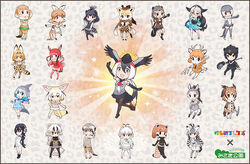 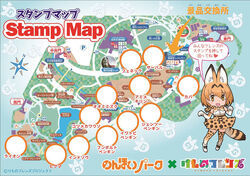 Retrieved from "https://kemono-friends.fandom.com/wiki/Collaborations?oldid=3864"
Community content is available under CC-BY-SA unless otherwise noted.