Emperor Penguin (コウテイペンギン, Koutei Pengin) or Emperor (コウテイ, Kōtei) is an Friend and the leader of the idol unit PPP appearing in game, manga and anime. 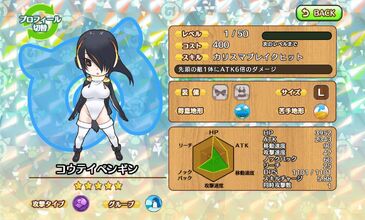 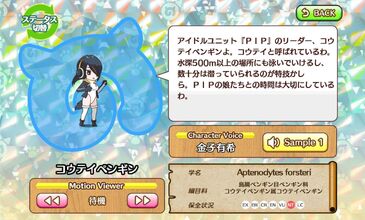 "The leader of the penguin idol unit PPP, Emperor, is here. Being an only daughter is tough, but we will soar toward our dreams!" 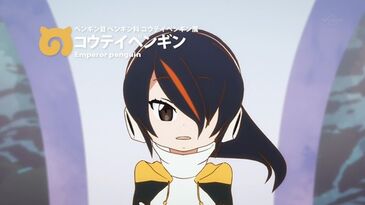 Emperor was scouted into reforming PPP for its third generation by Princess, much like the other members. She was given the role as leader to reflect the role of the Emperor Penguin in the unit's first generation.

She had found the first Emperor Penguin's dancing awe-inspiring and was worried she wouldn't live up to her legacy since her movement was the stiffest in the group. She suggested Princess should take over a leader, but Princess reassured her that she would be a strong and confident leader.

After a lot of practice under Princess' guidance, Emperor got to debut together with her unit at a massive concert within Japari Park's waterfront area. Despite her nervousness, the concert was a success thanks to the reassurance of Margay.

Shortly after the concert, Emperor and the rest of PPP met with Common Raccoon and Fennec. Emperor and Princess both reveal that they know details of how Sandstar forms new Friends while suggesting that Kaban might have been born from the Sandstar Eruptions.

Though she's the leader of the unit, she gets nervous easily. Most of the time she tries to hide her emotions behind a cool demeanor that reflect her stage persona. Hululu considers her a masochist because she enjoys going through rough struggles to live her normal life. 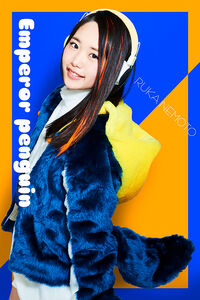 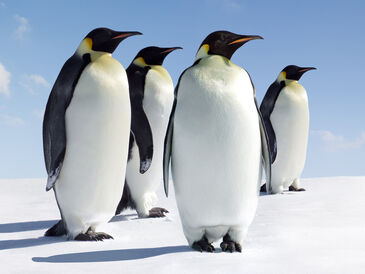 The Emperor Penguin has the greatest diving ability of all birds, with a total dive time of 20 minutes and at 564 meters depth on record. It's also the largest of all penguins alive today.

Retrieved from "https://kemono-friends.fandom.com/wiki/Emperor_Penguin?oldid=4900"
Community content is available under CC-BY-SA unless otherwise noted.