Eurasian Eagle Owl (ワシミミズク，鷲木菟, Washi Mimizuku) is a Friend in Japarry Park. Commonly referred to as the professor's assistant, she helps the professor with Japarry Library as well as serving as the chief authority among the park's Friends. 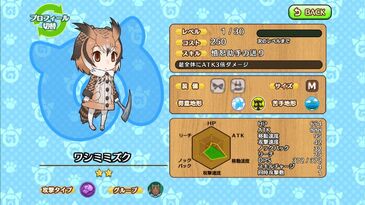 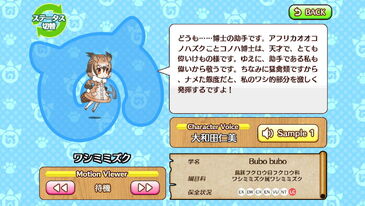 "Good day... I'm the assistant of the Northern White-faced Owl, professor Karen. Professor Karen is a genius, a great beast. Therefore I always show great respect towards her for letting me be her assistant. By the way, I am a bird of prey, so if you're giving me a bad attitude I will show off my eagle side ...Shaa!" 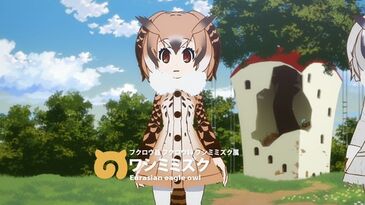 The professor's assistant has deep respect and affection for the professor and will work alongside her at all times. She also wanted to taste human cooking after the professor had heard about it and helped set up the quiz maze to determine who could help them.

When Bag and Serval arrived, she got to eat rice and curry together with the professor after Bag cooked it for them. After the professor had told Bag what species she was, the professor's assistant told them about how animal Friends are also human in a way.

When Bag was consumed by the Colossal Cerulean, she helped the professor gather up Friends to help rescue her. She also helped rebuild the Japarry Bus into a boat for Bag. 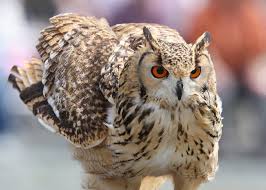 The Eurasian Eagle Owl is the largest of the owls, reaching a 1.5 meter wide wingspan at full growth. It's a particularly strong and nocturnal bird of prey, so it hunts at night.

Add a photo to this gallery

Retrieved from "https://kemono-friends.fandom.com/wiki/Eurasian_Eagle_Owl?oldid=4799"
Community content is available under CC-BY-SA unless otherwise noted.