Kaban (かばん) is a Friend that plays a main character role in the Kemono Friends anime.

Seemingly born after the Sandstar Eruptions, Kaban didn't have any knowledge of her species, name, or home. After meeting Serval, she was given the name "Kaban" after the Japanese word for Bag. She's easily frightened but has shown herself to be clever and good at thinking on the spot. 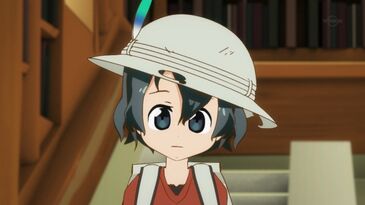 Kaban wakes up in Japari Park's savanna area on the morning after the Third Eruption. Unsure of her identity or her suroundings, she begins moving through the park until she meets Serval.

Explaining her situation, Serval suggests that she goes to the professor at the Japari Library to ask her what kind of Friend she is and where her home is. She starts making her way to the library, accompanied by Serval.

After meeting a lot of Friends, she's asked by Shoebill if she's a human. Kaban and Serval didn't know what a human was, but they keep this in mind as they pursuit forward. When reaching the library, the professor informs Kaban that she is indeed human.

The professor continues by telling her that humans went extinct a long time ago and that most Friends around these days have likely never seen one. Kaban continues her journey in hope that she'll find whatever humans might still exist.

After watching the debut concert of PPP's third generation, Kaban learns that humans were last seen at the harbor. On their way there Kaban unlocks another memo inside Lucky Beast, where she learns the name of Mirai.

While staying at Japari Lodge, Kaban triggered another function of Lucky Beast as it displayed a hologram of Mirai and another Serval. Serval realizes that Mirai is another human who recorded these messages a long time ago.

Upon reaching the harbor, Kaban learns that there are no humans left there. As she makes the decision to take a boat off the island to find humans elsewhere, her and Serval are suddenly interrupted by a large Cerulean threat.

Kaban and Serval made their way to the top of Japari Park's volcano and closed the Sandstar filter with the help of Common Raccoon and Fennec. After doing so, they joined up with the Cerulean Hunters to fight the Colossal Cerulean that was threatening the life of all the Friends at the park. Kaban came up with a plan to lure it into the water, and was given the title of Park Guide by Lucky Beast, giving her full authority.

During the fight, the Cerulean used its shape-shift abilities and consumed Serval, who had just gotten Kaban and Lucky Beast away from its grasp. Despite Brown Bear insisiting on following the plan, Kaban rescued Serval from the Cerulean. Though unconcsious, Serval was safe and Kaban lit her map of Japari Island ablaze to get the attention of the Cerulean, as she said her farewells to Serval before being consumed herself.

When Kaban was saved by the other Friends, she had already gone long through the process of being consumed by the Cerulean. She had reverted back to pure Sandstar and everyone thought her gone. However, since Kaban is human, the Sandstar reverted her back to her normal form. After Lucky Beast had sunk the Cerulean into the sea, Kaban and Serval tried to find where Lucky Beast had gone.

They found parts of Lucky Beast, enough for them to still talk to Kaban, and reassembled them into a wrist-worn model for Kaban to use. After a big feast a month later, Kaban was gifted a modified Japari Bus that doubled as a raft and she took off to the souther Gokoku Region.

A bulldozer has been here and has bulldozed some things.