Serval (サーバル) is an unknown generation Serval Cat Friend that plays a main character role in the Kemono Friends anime.

Likely born sometime after the Second Eruption, Serval lived a peaceful life in the savanna area within Japari Park until she met Kaban on the day after the Third Eruption. She's friends with Hippopotamus and decided to follow along on Kaban's journey to find her home and identity.

Yahoo! Is everyone doing alright? "Serval" actually means "Hound Dog". Even though I'm a feline, why is that? I'm actually often called a "Clumsy Girl" or "Trouble Maker", but that's not the case at all! It's my job to make everyone smile. So I'll do my best today as well!

Despite not having left the savanna area until after the Third Eruption, Serval is quite famous throughout Japari Park for being an airhead who often causes trouble for others. One morning she met a Friend who didn't have any memory of her identity or home, she decided to help out this friend whom she named Kaban.

Though Serval originally intended to let Kaban go on her own after she left the savanna area, the curiosity got the better of her and she decided to accompany her new friend to the Japari Library to ask the professor what kind of Friend Kaban could be.

After a long journey, Serval and Kaban reached the library and learned that Kaban was actually a human. Serval had never heard of humans before, but decided to stay with Kaban as she tried to find where other humans might be.

After spending a few nights at the Japari Lodge, Serval and Kaban triggered a hologram recording from inside Lucky Beast. In the recording Serval saw Mirai and another Serval Cat. For reasons she can't tell, seeing the hologram caused her to cry.

During a fight with a Colossal Cerulean, Serval was supposedly consumed after saving the life of Kaban by leading it away. Though Kaban was able to pull Serval out, she was unconscious as Kaban made a final effort to lure the Cerulean away.

Some time later, Serval wakes up to find that Kaban is trapped inside the Cerulean, and that she is miraculously still alive. She helps the cerulean hunters rescue Kaban, but finds that she is already turning back into stardust. However, instead of converting back into her animal form, Kaban stays as she is, because both her Friend and human forms were humans.

She Loves Kaban In Serval Jump ~I Want To See Kaban-chan!~

She Says Hi And Gets Kissed By Kaban From Compilation To Serval Jump ~I Want To See Kaban-chan!~ At The Japari Vacationhouse. 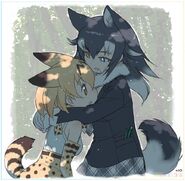