UMA
Tsuchinoko (ツチノコ) is a rare Friend who has lived on Japari Island and has appeared in all mainline Kemono Friends media to date. She's not a registered park resident, but rather lives on her own in solitude. Very few have ever seen her as she doesn't go outside much and is generally shy from socialization. 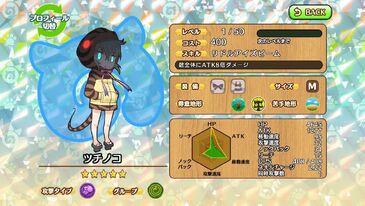 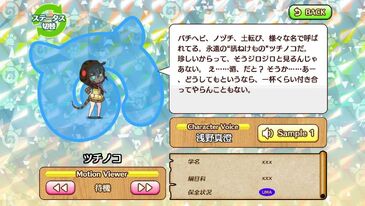 "Bachihebi, Nodzuchi, Tsuchikorobi, Tsuchinoko, I've been called many things. I know. Call me what you like. It's fine, don't worry about it. You're going to, right? Wait, is that a drink you have? I see... Well, if you insist I guess I'll have one."

Tsuchinoko found that other Friends would often get scared when she showed up, because of her threatening demeanor and undocumented status. As such, she hid away in a cave and lived on her own for a long time. While living in the cave she would survive on whatever she could find, collecting rain water and melting snow for water during the winter.

One day when Ezo Red Fox accidentally got trapped inside Tsuchinoko's cave, she managed to have her first social interaction that didn't end with a Friend running away. Ezo Red Fox taught Tsuchinoko about Japari Buns and the wonders of the park outside.

After Tsuchinoko had helped Ezo Red Fox out of the cave, she was offered to come see her some time. At first Tsuchinoko thought nothing of it, but she eventually decided to leave her cave in search of happiness. 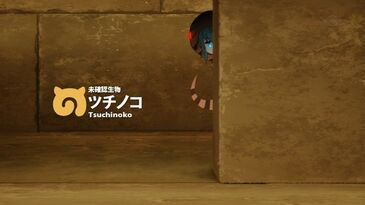 She's featured in episode 4 titled "Desert Area". After she met with Kaban and Serval, Tsuchinoko started to open up a bit again. After seeing Lucky Beast speak to Kaban, she realized the truth behind Kaban's appearance, though she decided to keep it to herself.

She was last seen talking with Sand Cat, Common Raccoon and Fennec within the Labyrinth Ruins. 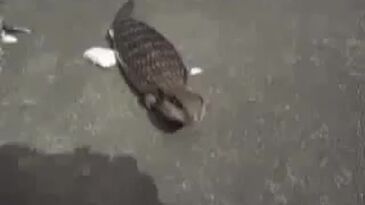 Tsuchinoko is based on a Japanese urban legend and is therefore classified as an UMA (Unidentified Mysterious Animal). They've been said to be a snake that's thicker than usual and can jump between 2 to 10 meters in length followed immediately by a second jump while still in the air. It's also said that it loves alcohol. Various places in Japan offer large sums of prize money for anyone who can find and bring a living Tsuchinoko to them. To date, the animal has not left the realm of urban legends.

Retrieved from "https://kemono-friends.fandom.com/wiki/Tsuchinoko?oldid=4424"
Community content is available under CC-BY-SA unless otherwise noted.